Why does my dog rub his face on the carpet? It seems like a strange behavior, and it’s one that many dog owners are curious about. However, there is actually a very good reason why dogs do this.

Dogs rub their faces on the carpet because it feels good. The fibers of the carpet stimulate the nerves in their face and make them feel happy and relaxed. This is why many dogs will keep rubbing their faces against surfaces – not just carpets, but furniture, walls, and even people’s legs!

More Reasons Why Dogs Rub Their Faces On The Carpet

Aside from feeling good, face rubbing also serves another purpose for dogs. When they rub their faces on the carpet, they are actually marking their territory. They do this by leaving behind their scent, which is why you might notice your dog’s face smells a bit different after he’s been rubbing it on the carpet.

If you have more than two dogs at home, you might have noticed that they will often compete with each other for space. The one who can mark the territory the best will be seen as the dominant dog. So, if your dog is constantly rubbing his face on the carpet, it could be a way of establishing dominance over his surroundings.

Getting rid of mites, ticks, and fleas

If you notice that your dog has started to rub his face on the carpet, it is important to take him to the vet to rule out any medical conditions. Once you have ruled out any health problems, you can start to work on training your dog not to do this behavior. If your dog has mites, ticks, or fleas, the vet will be able to prescribe medication to get rid of them.

Your dog is bored or anxious

Another reason why your dog rubs his face on the carpet is that he is simply bored or anxious. If your dog spends a lot of time alone, he might start to become restless and will look for ways to entertain himself. One way that dogs often do this is by rubbing their faces on different objects in the environment.

If you think that your dog might be bored or anxious, try to give him more exercise and stimulation. You can also try training him so that he will have something to focus on. If your dog is particularly anxious, you might want to consult with a behaviorist about how to help him relax.

It’s in his nature

Dogs have been known to rub their face on the ground before they attack their prey, so this behavior might be instinctual for some dogs. Therefore, if your dog is constantly rubbing his face on the carpet, it might be because he’s trying to tell you something.

Another possible reason why your dog is rubbing his face on the carpet is that he might be allergic to something in your home. Dogs can have allergies to different things like pollen, dust mites, and even foods. If you think that this might be the case, take your dog to the vet so that he can get a proper diagnosis.

How Do I Stop My Dog From Rubbing His Face On The Carpet?

For dog owners, it can be quite frustrating to see their dog constantly rubbing his face on the carpet. Luckily, there are a few things that you can do to try and stop this behavior. Let us explore them in more detail below:

Give your dog cues

It might take some time and patience to train your dog not to rub his face on the carpet, but eventually, he will learn that this is not something that he should do. If you are having trouble training your dog on your own, you might want to consider hiring a professional dog trainer. 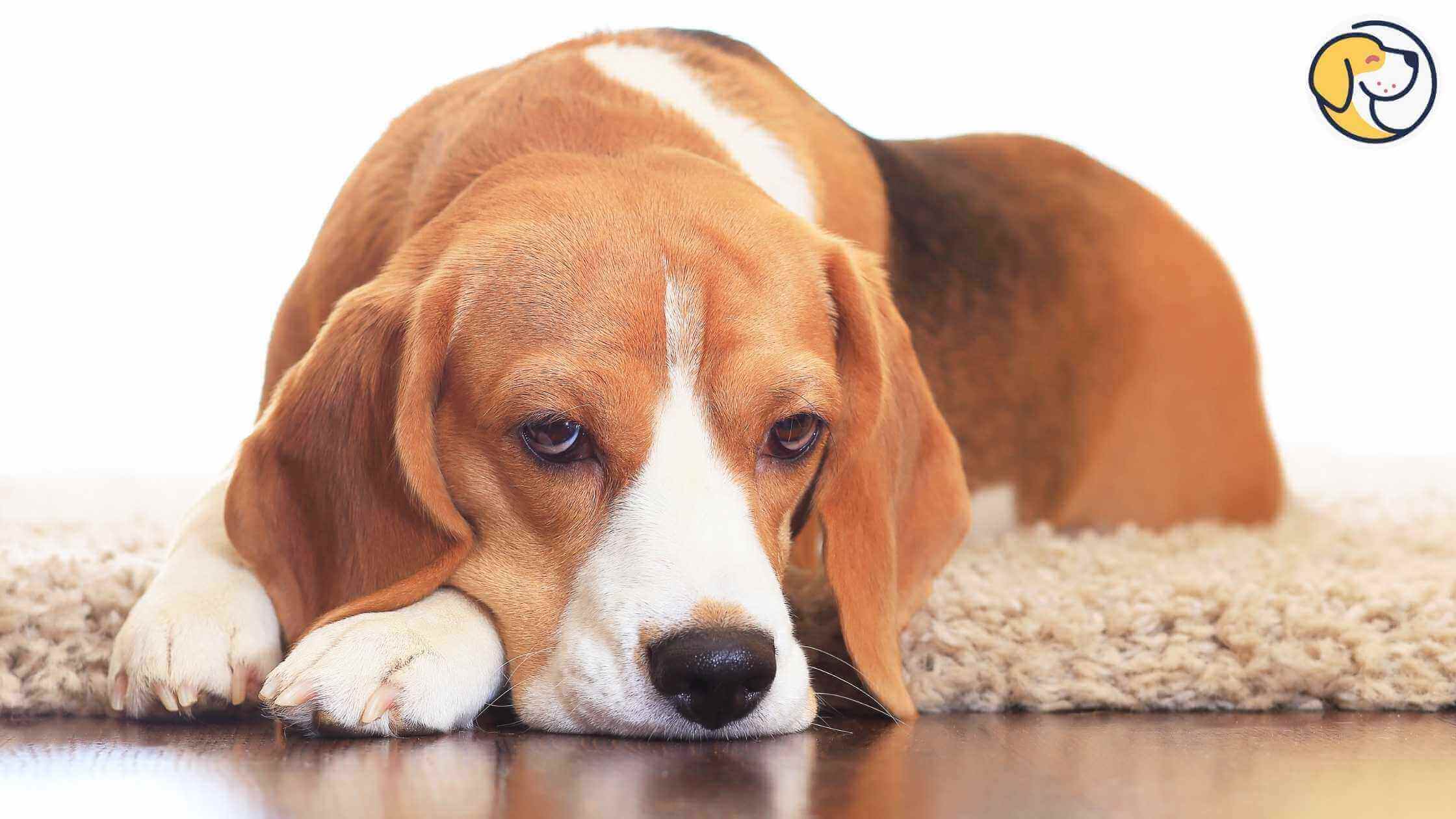 While we may not always understand why our dogs do the things they do, it’s important to remember that there’s usually a reason behind their behavior. Next time you see your pooch rubbing his face on the floor, try to take a step back and see things from his perspective. Who knows – you might just learn something new about your furry friend!

Dogs rub their faces against surfaces as a way to release tension in their facial muscles and calm themselves down. This behavior is often seen in dogs who are anxious or fearful, and it’s a way for them to reassure themselves that everything is okay.

In some cases, dogs may also rub their faces on the floor as a way to mark their territory. By leaving their scent all over the place, they’re telling other animals that this space belongs to them. So if your dog is constantly rubbing his face on the carpet, it could be a way of establishing dominance over his surroundings.

If your dog rubs his face on the carpet after you have taken him for a walk, it could be a way of getting your attention. Dogs are very good at picking up on our cues, and he may have learned that this is a behavior that gets you to pet him or give him some extra attention.

Whatever the reason for your dog’s face rubbing behavior, it’s important to remember that it’s normal and not something to be concerned about. If you’re ever worried about your dog’s health or behavior, always consult with a veterinarian or certified animal behaviorist. They will be able to help you figure out why your dog is behaving in a certain way and offer advice on how to address the issue.

It’s important to remember not to punish your dog immediately for behaviors like rubbing his face on the carpet. Instead, try providing him with positive reinforcement when he does something you want him to do – like sitting or staying calm in stressful situations. 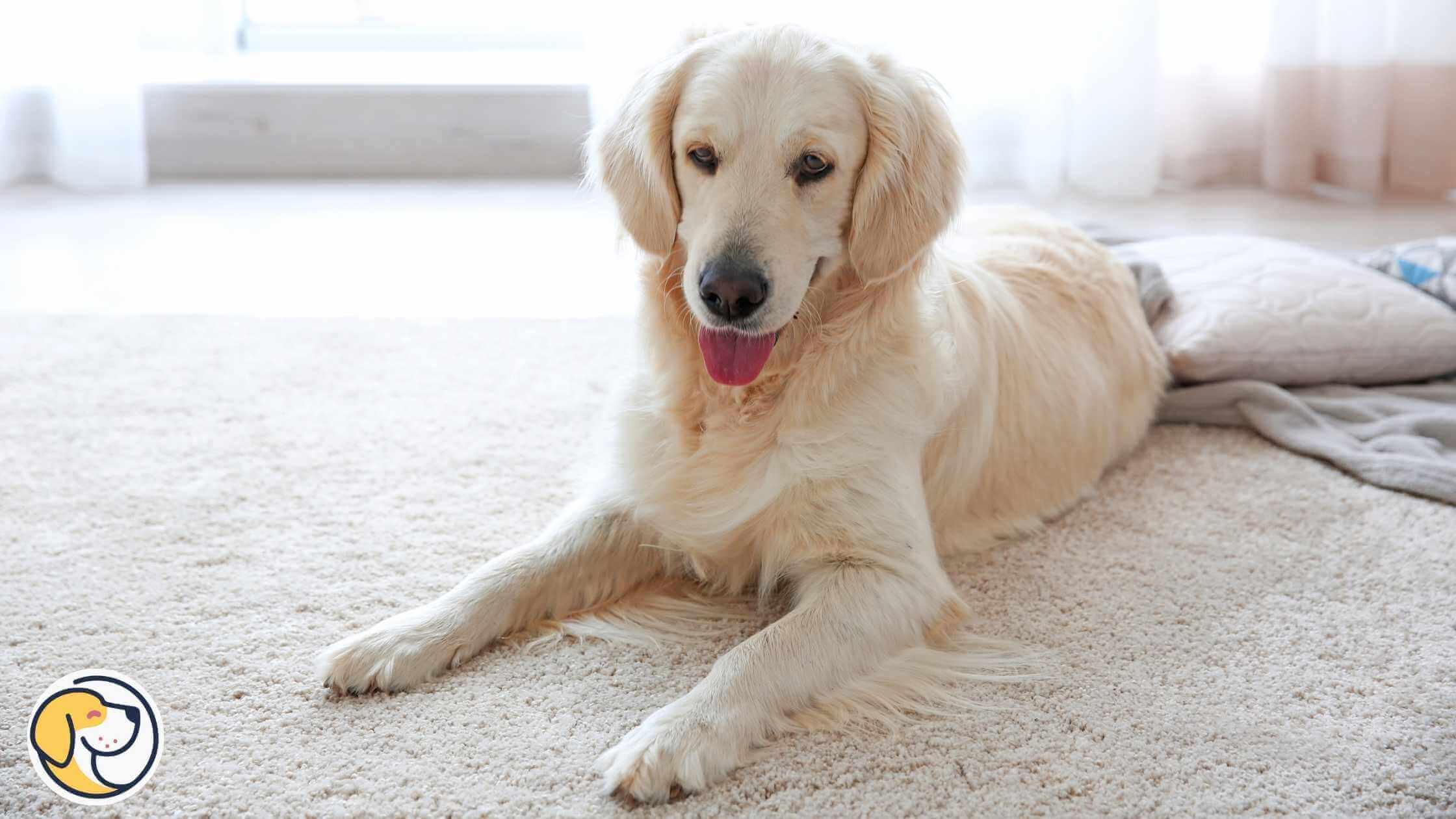 FAQs About Why Dogs Rub Their Faces On The Carpet

Why does my dog rub his face on the carpet after he eats?

Your dog rubs his face on the carpet after he eats because he’s trying to clean his face. Eating leaves food and other debris on their faces, so they instinctively try to clean it off by rubbing their face on the ground.

Why does my dog rub against the carpet?

Your dog rubs against the carpet to mark his territory. When dogs rub their bodies against something, they’re leaving their scent behind. This is why you’ll often see dogs rubbing their faces on the furniture or walls – they’re claiming these things as their own.

Why does my dog rub their face on the floor?

Your dog rubs his face on the floor because he’s trying to clean it. Dogs will often rub their faces on the ground to remove anything that’s stuck to them – think of it as a doggy version of wiping your face with a napkin.

How do I know my dog is happy?

You will know that your dog is happy when he starts to wag his tail. When your dog is happy, he’ll also start licking you or rubbing up against you. Dogs use these behaviors as a way to show their affection for their humans.

How do I stop my dog from scratching his face?

Why do dogs rub their nose on the floor?

Dogs rub their noses on the floor to spread their scent. This is why you’ll often see dogs rubbing their faces on the carpet – they’re trying to leave their mark! Dogs have scent glands in their faces that secrete a special smell, and by rubbing his nose on the floor, your dog is trying to claim a certain space as his own.

Why does my dog rub against the couch after a walk?

Your dog rubs against the couch after a walk as a way to mark his territory. He’s leaving his scent all over the furniture so that other dogs will know this is his turf. This behavior is especially common in male dogs, who tend to be more territorial than female dogs.

So, why does my dog rub his face on the carpet? There are a few different reasons, but most of them have to do with claiming space or leaving his scent. If your dog is rubbing his face on furniture or other objects around the house, try redirecting him to a toy or bone instead. This will help keep your home smelling fresh – and it’ll give your pup something to keep him entertained, too!

previous
Pepto-Bismol Dosage By Weight For Dogs
next
Dog Licking Vagina: What It Means And What To Do