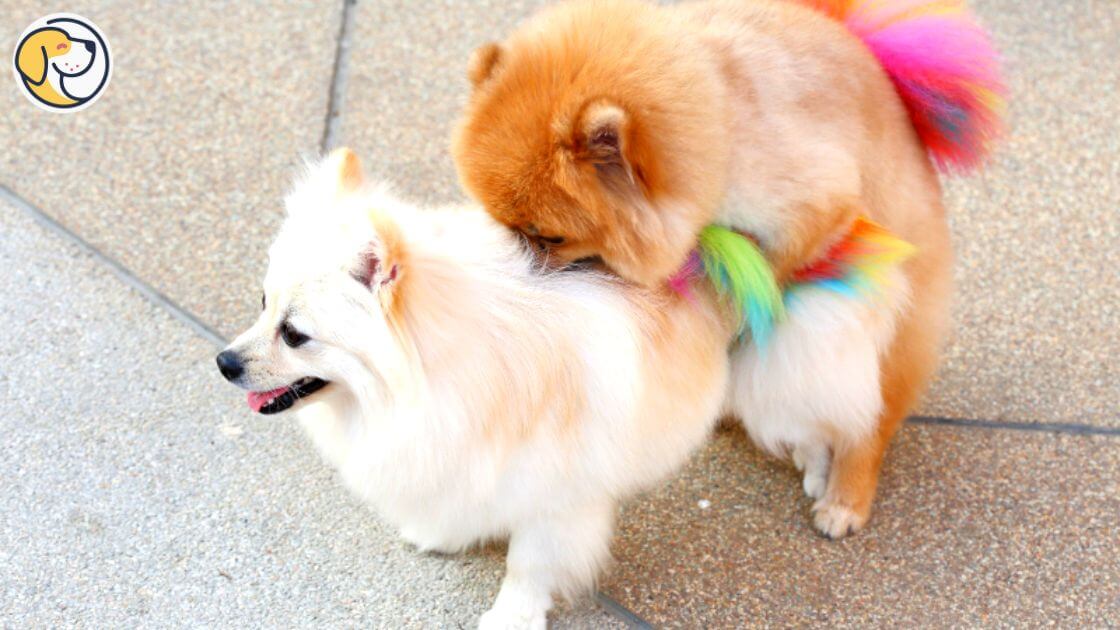 Dog mating can lead to unwanted puppies and a lot of behavioral problems for both male and female dogs. Uncontrolled breeding can lead to all sorts of problems, including overcrowding in animal shelters, expensive vet bills, and behavior problems in the puppies. As a dog owner, you must take measures to prevent your dog from mating if you don’t want puppies and to make sure that your dog is healthy and happy.

How To Stop Dogs From Mating?

The best way to stop dogs from mating is by having them spayed or neutered. This will prevent your dog from being able to reproduce and will also help to calm them down, making them less likely to want to mate in the first place. It’s a win-win situation! You can have your dog spayed or neutered at your local vet’s office or animal shelter.

Another way to stop dogs from mating is by separating them when the female is in heat. This means keeping them in different rooms or even in different houses if possible. If you have to keep them in the same house, put up a baby gate or something similar to keep them apart. This will help to prevent any accidents from happening.

However, if you do not plan on breeding your dogs, then the best way to stop them from mating is to have them both spayed or neutered. This will not only help to prevent unwanted litter, but it will also help to keep your dogs in good health.

Yes, dogs will mate instinctively when the female is in heat. However, this does not mean that they will necessarily do it every time she comes into heat. If you have a dog that is constantly trying to mate with your other dog, it is probably best to get him neutered. This will help to reduce his urge to mate and make him a better pet overall.

If you have decided to have your dogs spayed or neutered, you just have to take them to the vet and they will do the rest. It is a simple procedure that takes just a few minutes and your dogs will be back to their normal selves in no time.

Plus, spaying or neutering dogs will help fix behavioral problems and make them less likely to roam around looking for a mate. So, it is really a win-win situation for you and your dogs.

What Will Happen If I Don’t Get My Dogs Spayed Or Neutered?

If you don’t get your dogs spayed or neutered, they will continue to mate. This means more puppies and a higher chance that those puppies will end up in shelters. It also means that your dogs are at risk of getting pregnant or contracting diseases.

So, if you want to stop your dogs from mating, the best thing to do is to get them spayed or neutered. It’s good for them and it’s good for you, too. After all, you no longer have to keep worrying about them getting pregnant or contracting diseases.

When Do Female Dogs Go Into Heat?

Female dogs usually go into heat twice a year, but this can vary depending on the breed. Smaller breeds tend to go into heat more often than larger breeds.

During this time, male dogs will be attracted to the female dog’s scent. This is why it’s important to keep an eye on your female dog when she’s in heat. If you let her outside, make sure she’s in a secure area where there are no male dogs around.

How Long Does A Dog Heat Cycle Last?

A dog heat cycle usually lasts about 21 days. However, this can vary depending on the dog. Some dogs may have a shorter cycle, while others may have a longer one.

What Are The Signs That A Dog Is In Heat?

There are several signs that a dog is in heat. These include:

One of the physical indicators that a dog is in heat is a swollen vulva. This is caused by the increased blood flow to the area. You will also notice blood or discharge coming from the vulva.

Another sign that a dog is in heat is a change in behavior. Dogs in heat may be more clingy than usual or they may try to escape from their home. They may also be more aggressive than usual.

Another sign of a dog in heat is increased urination. This is due to the increased blood flow to the area and the need to release some of the built-up pressure.

How do you stop a male dog from approaching a female dog in heat?

The best way to stop a male dog from approaching a female dog in heat is to keep them separated. This can be done by keeping the dogs in different rooms or by using a leash when they are outside.

How long will a male dog be attracted to a female in heat?

A male dog will usually be attracted to a female in the heat for the duration of her cycle, which is typically about three weeks.

How do you detach a male dog from a female?

You should NEVER try to detach a male dog from a female in any way. Doing this will likely cause injuries to both dogs. The best way to stop them from mating is to have them spayed or neutered or to keep them separated.

Is there a spray for dogs in heat?

There is no spray that will stop a dog in heat from mating. The best way to stop them from mating is to have them spayed or neutered or to keep them separated.

Why do male dogs cry when females are in heat?

When a male dog smells a female in heat, it triggers an instinctual urge to mate. This can cause him to become agitated and he may whine or howl as a result.

Why do male dogs go crazy over female heat?

Male dogs find the scent of a female dog in heat to be incredibly intoxicating. This is because the female’s body is releasing special pheromones that signal to males that she is ready to mate. The combination of the physical and chemical cues can drive a male dog wild with excitement.

Why do female dogs cry when mating?

The female may cry during mating due to the intense physical sensation. Some females also become very agitated and may even snap at the male. This is usually because they are not used to the feeling of someone else mounting them.

Will a male dog keep trying to mate?

Yes, males will continue to try and mate with a female even if she is not receptive. This can be very dangerous for the female as she can become injured from the male’s repeated attempts. It is important to keep an eye on males when they are around females in heat and to intervene if necessary.

Can a male dog penetrate a female dog that is not in heat?

No, a male cannot penetrate a female that is not in heat. The female’s body is not ready to mate and will not allow the male to enter. This can be frustrating for the male but it is necessary for the safety of the female.

If you want to know how to stop dogs from mating, you need to start with understanding the heat cycle of the female dog. Once you know when she is in heat, you can take steps to avoid mating. The most effective way to stop dogs from mating is to spay the female dog. This will prevent her from going into heat and eliminate the possibility of pregnancy. You can also have the male dog neutered to help reduce his desire to mate.

previous
How To Get Two Female Dogs To Get Along?
next
How To Put Bows In Dogs Hair?